StackStorm is a platform for integration and automation across services and tools, taking actions in response to events.

StackStorm is a platform for integration and automation across services and tools, taking actions in response to events. Learn more at www.stackstorm.com.

StackStorm is a platform for integration and automation across services and tools. It ties together your existing infrastructure and application environment so you can more easily automate that environment -- with a particular focus on taking actions in response to events.

StackStorm helps you compose these and other operational patterns as rules and workflows or actions; and these rules and workflows - the content within the StackStorm platform - are stored as code which means they support the same approach to collaboration that you use today for code development and can be shared with the broader open source community via StackStorm Exchange.

See the list of known StackStorm ADOPTERS.md and Thought Leaders. 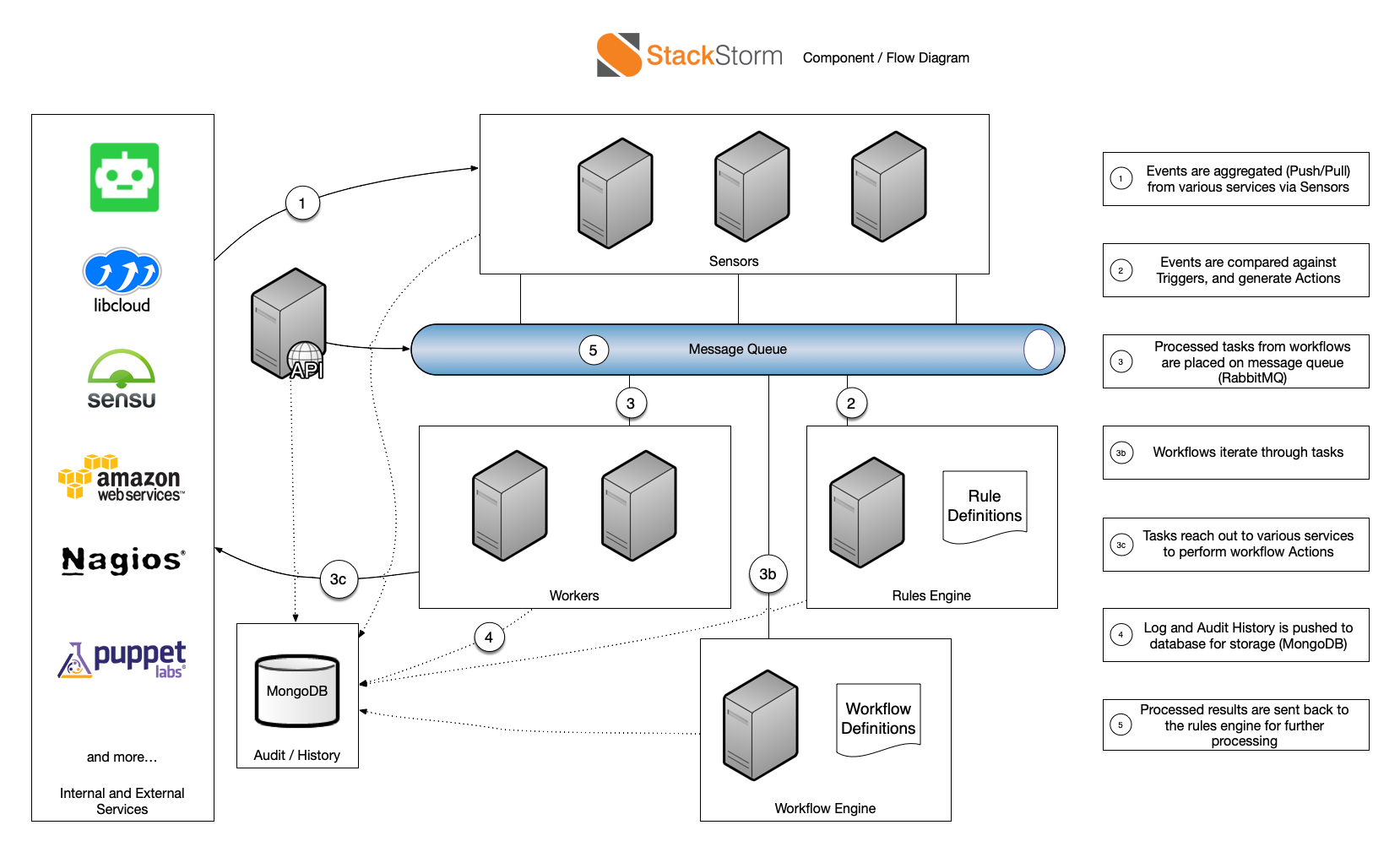 StackStorm plugs into the environment via an extensible set of adapters: sensors and actions.

StackStorm is a service with modular architecture. It is comprised of loosely coupled microservice components that communicate over a message bus, and scales horizontally to deliver automation at scale. StackStorm has a full REST API, CLI client, and web UI for admins and users to operate it locally or remotely, as well as Python client bindings for developer convenience.

StackStorm is an established project and remains actively developed by a broad community.

To set up a development environment and run StackStorm from sources, follow these instructions.

For information on how to contribute, our style guide, coding conventions and more, please visit the Development section in our documentation.

If you believe you found a security issue or a vulnerability, please send a description of it to our private mailing list at info [at] stackstorm [dot] com.

Once you've submitted an issue, you should receive an acknowledgment from one our of team members in 48 hours or less. If further action is necessary, you may receive additional follow-up emails.

Licensed under the Apache License, Version 2.0 (the "License"); you may not use this work except in compliance with the License. You may obtain a copy of the License in the LICENSE file, or at:

By contributing you agree that these contributions are your own (or approved by your employer) and you grant a full, complete, irrevocable copyright license to all users and developers of the project, present and future, pursuant to the license of the project.

Actionsflow If you like Actionsflow, please vote for us on Product Hunt The free IFTTT/Zapier alternative for developers to automate their workflows b

µTask is an automation engine that models and executes business processes declared in yaml. ✏️📋

µTask, the Lightweight Automation Engine µTask is an automation engine built for the cloud. It is: simple to operate: only a postgres DB is required s

Pipelines Pipelines is a simple tool with a web UI to manage running tasks. It supports running tasks manually through a Web UI or automatically via w

PatrOwl PatrOwl is a scalable, free and open-source solution for orchestrating Security Operations. PatrowlManager is the Front-end application for ma

Healthchecks Healthchecks is a cron job monitoring service. It listens for HTTP requests and email messages ("pings") from your cron jobs and schedule

NOTICE: This repository has been DEPRECATED. Do not use. Welcome to the bip.io API Server (Snow 0.4) bip.io is Billion Instructions Per I/O - For Peop

Create agents that monitor and act on your behalf. Your agents are standing by!

What is Huginn? Huginn is a system for building agents that perform automated tasks for you online. They can read the web, watch for events, and take

A flexible event/agent & automation system with lots of bees 🐝

Beehive Beehive is an event and agent system, which allows you to create your own agents that perform automated tasks triggered by events and filters.

Adaptable, fast automation for all

Gradle is a build tool with a focus on build automation and support for multi-language development. If you are building, testing, publishing, and depl

Home Assistant is an open-source home automation platform running on Python 3. Track and control all devices at home and automate control.

A tool for automating the installation of the Microsoft Windows operating system on various device platforms.

🧠 Leon is your open-source personal assistant.