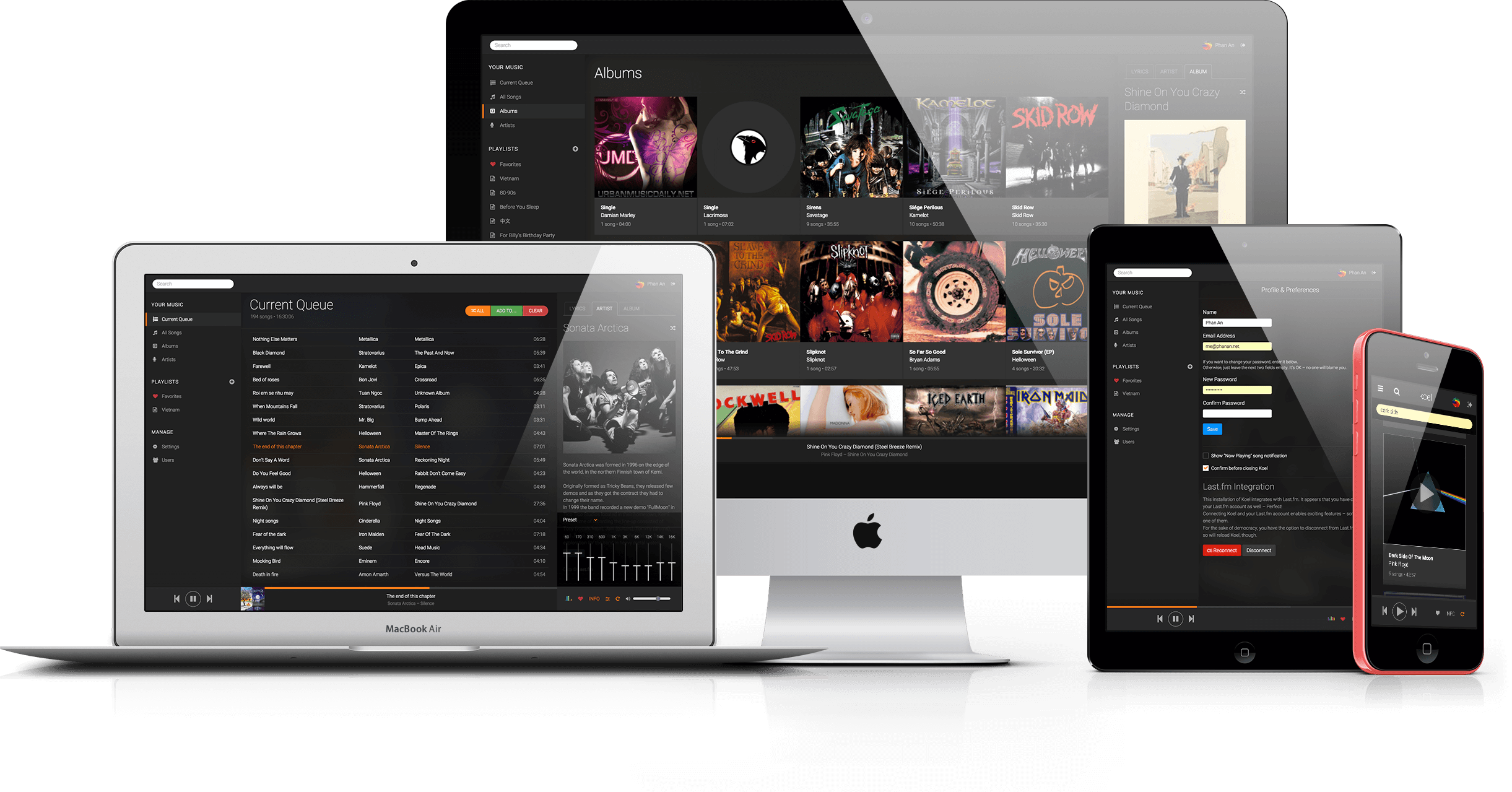 Koel (also stylized as koel, with a lowercase k) is a simple web-based personal audio streaming service written in Vue on the client side and Laravel on the server side. Targeting web developers, Koel embraces some of the more modern web technologies – CSS grid, audio, and drag-and-drop API to name a few – to do its job.

For system requirements, installation/upgrade guides, troubleshooting etc., head over to the Official Documentation.

Since Koel makes use of git submodules, you'll want to make sure the submodule is up-to-date:

To start the PHP dev server, which serves as the API of the application, run the following command from the root directory. By default, the server will listen at port 8000.

For the client application itself, run this command:

A development version of Koel should now be available at http://localhost:8080 with full support for hot module reloading.

Alternatively, you can start both the PHP server and the client application in one go with yarn dev, which uses start-server-and-test under the hood.

Note: If you're already running yarn test:e2e, there's no need to start a dev server. yarn test:e2e calls yarn dev internally and will eliminate the existing yarn dev process, if any.

A quick and easy way to start hacking on koel is to open and run this repo in Gitpod, an online IDE with full Laravel support.

Support me on OpenCollective with a monthly donation and help me continue building Koel.

Become a sponsor on OpenCollective and get your logo on our README on Github with a link to your site.

Music typeset with the Lilypond system

Intro (from long ago) This repo contains sheet music typeset with the Lilypond typesetter. The music chosen is in favour of cello music (mostly chambe

OpenSheetMusicDisplay renders sheet music in MusicXML format in your web browser based on VexFlow. OSMD is brought to you by PhonicScore.com.

Streaming music player that finds free music for you

Installation | Docs | Changelog | Contributing composers chatting Alda is a text-based programming language for music composition. It allows you to co

Mopidy is an extensible music server written in Python

beets Beets is the media library management system for obsessive music geeks. The purpose of beets is to get your music collection right once and for

Get Started | Features | Screenshots | Programming | CLI | Contribute | License Midica is an interpreter for a Music Programming Language. It translat

Ripple - DRY for Lilypond Ripple is a small program that helps you generate scores and parts without repeating yourself, performing complex includes o

The git repository of the advanced drum machine

Hydrogen drum machine Hydrogen is an advanced drum machine for GNU/Linux, Mac and Windows. It's main goal is to bring professional yet simple and intu

Museeks A simple, clean and cross-platform music player. (museeks.io) Features Museeks aims to be a simple and easy to use music player with a clean U